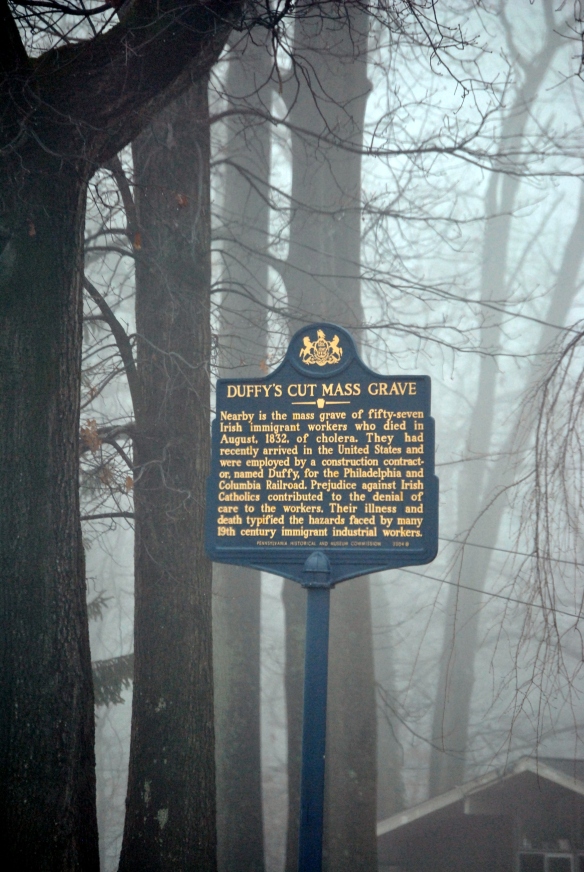 Duffy’s Cut victim John Ruddy, late of Chester County, is to be buried after services March 2 in County Donegal, Ireland.

Ruddy was one of up to 57 Irish immigrants who died of cholera and probable mob violence at an East Whiteland railroad construction site known as Duffy’s Cut.

Ruddy and the others are believed to have died nearly 181 years ago in the last two weeks of August 1832. Ruddy was 18.

His are the only remains thus far identified from an incident that was successfully hidden from the general public until recent years.

Professor William Watson of Immaculata University released details of the funeral arrangements. Services are set for 3 p.m. at Holy Family Church in Ardara, Donegal. Burial will be in the church cemetery.

A week or so I happened to be passing by the Duffy’s Cut historical marker (I got a historical marker approved a few years ago and it is a lot of work to get one of them)  and stopped to photograph it.  Given the clouds of mystery and intrigue still surrounding Duffy’s Cut, I think the foggy afternoon was perfect. I also think that given the development occurring in Malvern (borough and East Whiteland) by developers who don’t truly give a rat’s fanny about the area, the history, or the current residents (they care about building and selling  projects) it is also appropriate to remember the history. You can never truly move forward into the future if you can’t honor the past, or that is just my opinion as a mere mortal and female.

I have always thought the tale of Duffy’s Cut to be a huge part of the history of Malvern. The Duffy’s Cut Project is housed at Immaculata. You can go see it.

The Smithsonian Channel has a special about it – called the Ghosts of Duffy’s Cut.

Duffy’s Cut is a big deal.  What was Duffy’s Cut?

In June, 1832, a group of 57 Irish immigrants from Donegal, Tyrone, and Derry arrived in Philadelphia. They were brought to Chester County by a fellow Irishman named Philip Duffy as laborers for the construction of the Philadelphia and Columbia Railroad, Pennsylvania’s pioneering railroad. Within six weeks, all were dead of cholera and possibly violence, and were buried anonymously in a ditch outside of Malvern.

Two brothers, Frank and Bill Watson have done yeoman’s work on this topic of Duffy’s Cut.  Read about them in the Wall Street Journal:

The Mystery of Duffy’s Cut

“Let’s find some bodies,” said Bill Watson, a professor of history at nearby Immaculata University.

Two children playing nearby scampered away before the men led by the Watsons—twin brothers and historians—started chipping away at a hillside hemmed in by two housing developments and busy railroad tracks.

The Watsons are on a macabre mission that began with a file of railroad company documents left behind by a grandfather and curiosity about what exactly happened at this spot—known as Duffy’s Cut—nearly 180 years ago.

This much is clear: Nearly 60 Irish laborers died here in 1832 as they built a land bridge for what became the thriving railroad that lent its name to Philadelphia’s affluent Main Line suburbs.

Their bodies were believed to be buried in a mass grave next to the railroad line, used today by Amtrak and local commuter trains. Tales of ghost sightings nearby were passed down through generations of area residents.

Cholera seemed the most likely culprit. Newspaper reports from the time reported that the disease killed several of the laborers at Duffy’s Cut. And an 1833 letter written by a superintendent of a precursor of the Pennsylvania Railroad said the contractor who hired the workers, Philip Duffy, lost “nearly one half of his men” to cholera. But early in their research, the Watsons began to suspect there might be more to the story….

In 2009, they began finding skeletal remains of at least four people. While many questions linger, the Watsons have become convinced at least three of them didn’t die of cholera.

One skull has holes with traces of lead on the edges, indicating a bullet’s entry and exit wounds, as well as a narrow slit that appeared to be delivered by an axe or hatchet. Another has a compression fracture suggesting it was caused by a blunt object. The third had dents in the skull indicating violence….

The work at Duffy’s Cut has received media attention in Ireland, and the Watsons have told the story to Irish heritage groups here. Michael Collins, the Irish ambassador to the U.S., has visited Duffy’s Cut twice.

“I was really struck by the human tragedy of all these young people dying so soon after coming here, and family back in Ireland never knowing what happened to them, or even knowing that they were dead,” he said. “Their story needs to be told.”

Unfortunately as of October 31, 2011 from what I can tell the archeological digs stopped.  It seems AMTRAK had enough.  I am not surprised.  I made a bit of a project out of them once upon a time and they are souless money grubbers who are horrible neighbors, charge ridiculous amounts for often dirty, smelly trains and piss poor service, so why would I be surprised history was also not their forte? The short answer is I am not.
I have not found anything more recent than a 2012 YouTube video put out by The University of Pennsylvania. Of course one would think our Congressman Jim Gerlach and our US Senators, State reps, State Senator Any Dinniman, and Gov. Corbett might show an interest in getting whatever that is left to be done gets done?  But until they do, I daresay the ghosts of Duffy’s Cut will wander.

The dig for Irish remains at Duffy’ Cut in Pennsylvania has come to an end.

Frank and Bill Watson, the historians who first  located the remains of Irish railroad workers, many of whom are believed to have  been murdered in 1832, say that the mass grave they have been seeking is  unreachable

It has been located 30 feet underground but too near  to an existing Amtrak track to unearth it. It is said to hold the remains of up  to 57 Irish emigrants from Donegal, Derry and Tyrone.

The Watsons, believe most of the Irish were likely  victims of lynch mobs  driven by anti-Irish sentiment which was widespread  at the time.

The discovery of the mass grave came when  geophysicist Tim Bechtel used updated equipment   electrical imaging  and seismic surveys, to discover the mass grave 30 feet below the surface.

It’s also on Amtrak property. They will not permit  any digging because of its proximity to the tracks, spokeswoman Danelle Hunter  told Associated Press.…The mass remains are of Irish immigrants, mostly  from Donegal, who were building the railroad near Philadelphia when they all  mysteriously died….

Frank and Bill Watson with the help of volunteers  and archaeologists proved via DNA and testing that most of the Irish had   been murdered and did not die of cholera.

“Since the beginning, we have seen it as our job to  get their story out of folklore and into actual history, and we hope we have  done that,” Bill Watson told Associated Press.

A local monument stated the men had died of “black  diptheria” in 1834 but it is known they died two years earlier.

Soon after they started digging they found the  remains of six people and a nearby shantytown.

University of Pennsylvania anthropologist Janet  Monge found proof of savage violence done to the remains including a bullet  wound to the head of one of them.

Many locals had been sceptical that anything would  be found. East Whiteland Township Manager Terry Woodman told AP.

“Some people thought that this was lore, a story  that through the telling had been exaggerated,” Woodman said. “There was a lot  of skepticism.”

The rest who were killed were ordered buried in a  mass grave and their shantytown burned to the ground.

One victim was identified victim as 18-year-old John  Ruddy, based on his bone size and the passenger list of a ship that came   from Ireland to Philadelphia shortly  before the men died.

The brothers plan to bury  the remains  found  in a suburban Philadelphia cemetery around St. Patrick’s Day, March  17.

Dennis Downey, a history professor at Millersville  University, said the work done has been invaluable.

So Malvern, as you look at the developer tarting up one end of the town to sell his project, remember what happened in the East Whiteland side of Malvern. Here’s hoping some day the dead there can all rest.  They certainly didn’t get what they deserved coming to America looking for honest work.