(WHY I won’t be voting Republican in the PA6 Congressional race this fall.)

Until the last Presidential Election, I was a life-long Republican.  I had always been an inveterate ticket splitter, but I remained a Republican…until this last presidential race.

But I couldn’t do it anymore.  I couldn’t pretend this was the political party that once made me believe.  When I was a Media Relations Volunteer at the RNC2000, I never, ever would have thought they would boil down to this hot party mess they have devolved to.

I know I am not a true Democrat, anymore than I am a current-style Republican.  So I went Independent. Yes, I lost my primary voting rights because it’s Pennsylvania, but I felt I had taken something back for myself by freeing myself from political rhetoric I could not get behind.

I have never voted Democrat in the PA 6th Congressional District. And I have been in this district seemingly forever.  First in Lower Merion Township, and now even after a couple rounds of redistricting, here in Chester County.  I voted gladly for Jim Gerlach every time he ran, and I also voted for Ryan Costello.

To an extent, I am so turned off by American politics and the nouveau Republican party, I kind of just literally closed my ears for months and months.  No easy feat for a political junkie.

I had heard about Greg McCauley and would have actually considered him because of his Philadelphia area familial and legal profession lineage. Until that September 1st tweet. I realize it was probably some campaign minion, but it doesn’t matter.  As a candidate he let it go forward, right?

Chester County needs Republicans they can count on, not #TrumpLite . This is why Chester County continues to veer away from it’s Republican roots and history and will soon be another county in PA with a Democratic majority.

I found this position VERY interesting.

Chrissy Houlahan has served her country proudly in the US Armed Forces and deserves what the Brits call worthy opposition. A Republican man demeaning his female opposition is not someone voters today will find worthy.

This kind of behavior in PA 6 is nothing new, but it IS old and used.

Today as a candidate (in my humble opinion), you  need to run a campaign based on what YOU would bring to the table not tired sexist rhetoric that the “party” wants. We don’t want #TrumpLite in PA.  Jim Gerlach was always his own man. McCauley needed to be THAT guy for his own sake as well as voters.

My Democratic door knocker said to tell all of you he was tall and dashingly handsome. He made me laugh and was super pleasant to deal with.

Today, a little while ago, a very nice man came knocking on my door.  Wanting to speak to my husband.  Poor man he got me.

He was a door knocker for the Democrats.  ( I will admit I handed him back his Tom Wolf palm card and told him why : PIPELINES AND BROKEN PROMISES FROM THE LAST CAMPAIGN. But I digress….)

Chrissy and her campaign like to tell you what she believes in. She doesn’t waste the voters’ time just slamming and denigrating her opponent, does she?

These days Republicans seem to take a lot of us voters in Chester County for granted.  I have not seen anyone from the Republicans door knock in a couple of years, and even then it was merely committee people, not actual candidates.

So this afternoon this Democratic door knocker told me a little bit more about Chrissy Houlahan, and I in turn told him about what made me look at her again the other day. And decide.

Yes, all it took was one sexist, rude, misogynistic tweet.

He also told me about Kristine Howard who is running against Duane Milne in the PA 167th legislative district. Kristine Howard (according to her Facebook political page biography ):

“is known in suburban Philadelphia as a political activist who spent most of the last decade working for progressive Democratic candidates and serving diligently as a member of the Chester County Democratic Committee from Malvern while balancing the responsibilities of work and single-mother parenting…. After law school she planned to pursue a career in public interest law but her career plans took a detour after getting married and having two babies while in law school. After law school, she spent five years in New Mexico, where she ran a small legal and social services organization while her family grew. When she came back to Pennsylvania, she devoted the next many years focused on raising her three boys and four girls. It was not easy to combine a “real” career with raising a large family but she always found something to do to stay engaged in her civic interests and social activism. She worked for Philadelphia Volunteer Lawyers for the Arts and was a child advocate for children in foster care in Philadelphia. Her keen interest in children and child welfare opened the door to her current position, working for the County investigating child abuse cases. As a caseworker, she has come to see a darker side of the wealthy and beautiful Chester County communities where she has raised her family. Her experiences as a social worker, mother and political activist have come together in her decision…”

Honestly, I never heard of her. But that is a lot of the problem about Chester County politics. You do not hear about some candidates at all. Especially, I am learning, if you are an Independent.

But this post is not about THAT race.  This post is about the 6th Congressional District Race.

And something has got to give.

So I am thinking this indeed might be the election that flips the 6th.  John Micek from PennLive.com has been saying so for months.

It’s a relatively simple concept that has more to do with us as Pennsylvanians than anything else.  We need someone with a spine. A backbone. A strong moral compass.  This race, it seems more and more that Chrissie Houlahan is the woman for the job.

Check out this September 2nd piece in the New York Times.

Please note these are only my opinions and I was not asked to write this nor compensated in any way to write this.  I am writing this post because it’s time to say something.  We have to be the change we want.

I want change. Not more tired rhetoric. It’s time for more women in Congress and I would like to start with my very own district. If that makes me a potential “enemy of the state” by some of my Republican friends, I am sorry you feel that way. I think Chrissy is the best choice for me at this time in my life. If Chrissy Houlahan came knocking on my door personally, I would be very please to chat with her. As a woman, I like what I hear.  Now more than ever, that matters to me. 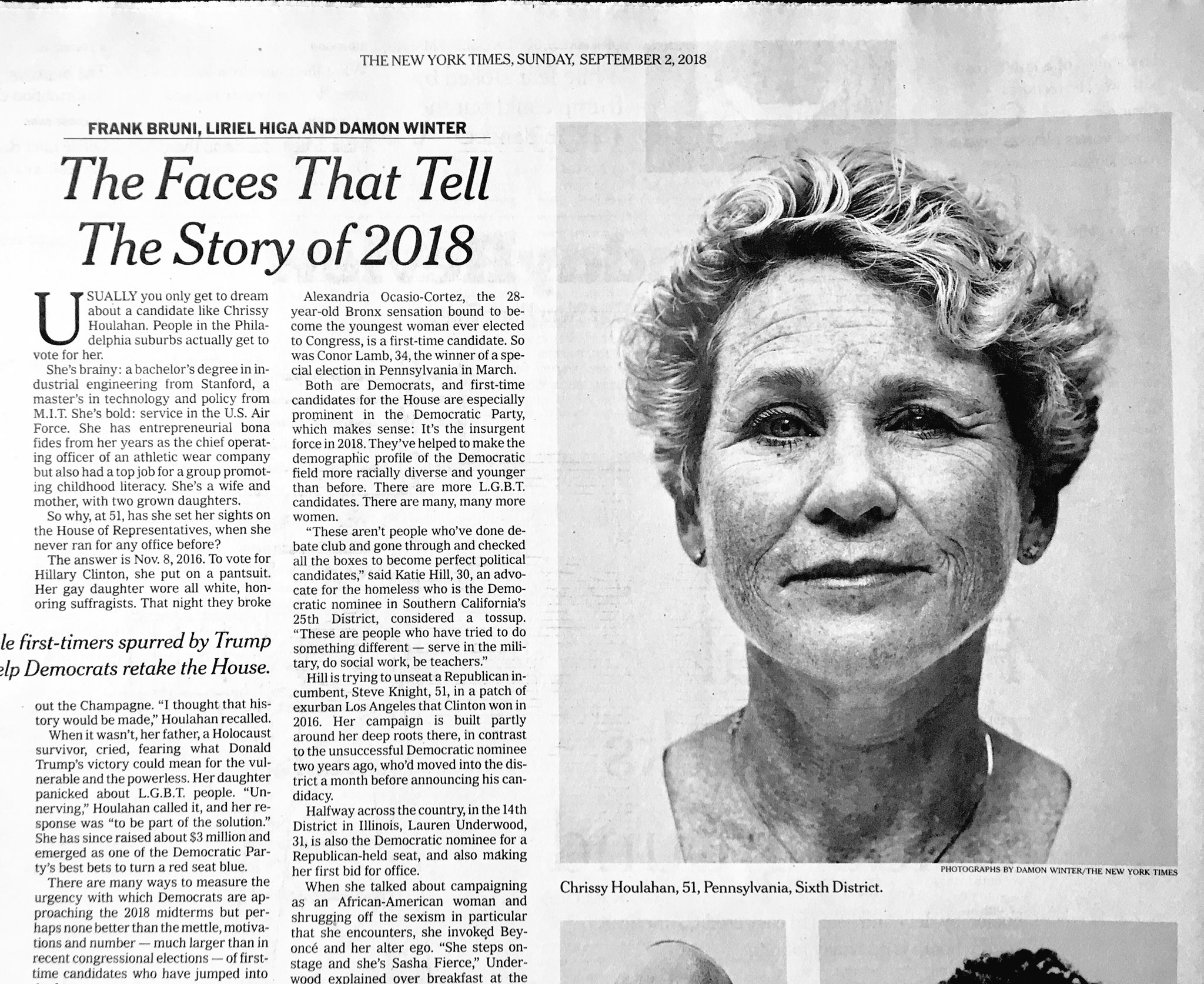 2 thoughts on “we have to be the change we want”