This first pegged below was sent to me re: Easttown and the proposed hideous plan for Handel’s Ice Cream and some of the BUSINESSES seem to be AGAINST the residents?

This was part of something sent out by a guy in the Berwyn Devon Business Association – I am told they used to head the group but now Stacey from Eadeh below does ?

The email says (and I quote):

Just a reminder that tomorrow night Sept 17 at 7pm will be the zoning meeting to hear public comment regarding the Berwyn Square/Handels development. We need the business community to come out to support this project which could be the game changer for Berwyn like East Side Flats for Malvern. The neighbors who are against it have rallied a petition and seem to project fear based on change and not looking at this as an opportunity for growth and vibrancy in our community and getting rid of an eyesore at the entrance to the Village. If you can’t make it please text me or email Stacey Ballard at staceyballard@eadeh.com with your comments and support. Again we need to balance the negative but not majority voice. Thank you!!!

So the author is a Realtor aren’t they? And I have to ask how much Eadeh Enterprises would profit if this project goes up? Wouldn’t it benefit their property values?

Also note the post card that went out to the business community about the project (and a meeting last week) and do you see the rendering? The people who are running this business association don’t seem to respect the residents they want as customers do they?

Look, the thing about businesses is that a lot of those people do NOT live RIGHT there where this is being proposed 24 hours a day /7 days a week / 365 days a year. Not all business owners anywhere and everywhere are also residents of municipalities going through development angst. That is WHY they often do NOT get WHY residents are upset.

In this case in Easttown I don’t get WHY developers don’t get why residents are upset, especially because some of them live in Easttown, so how could they propose something so out of character, right?

And oh yeah, have you all looked closely at Eastside Flats that the business association seeks to make a comparable on? Facade is the only thing with something to it and 3 sides of the building are NOTHING  as in they look like a cheap motel at the beach on 3 sides and will the facade finishes withstand the test of time? And as for safety, can a fire truck actually get BEHIND Eastside Flats? Or would they have to go up on the train tracks? And have you ever stood in the little neighborhood on the other side of the train tracks to see what those people see? A big hulking building shadow hanging over them?  And the sidewalk don’t even properly go to the edge of the driveway/parking lot at Eastside Flats. You have to step up and go over mulch so isn’t that a problem for the handicapped and elderly? (And why has Malvern Borough had them fix that?)

I took this photo when the flats were being built

We all patronize the businesses at Eastside Flats because we love them, but stand inside some of them if something gets flushed upstairs and tell me what you hear ? IMHO inside this one store you hear everything. And that was with music playing in the store.

East Side Flats still does not fit or complement Malvern Borough from a design aesthetic and never will. I don’t think that is right. And to say that building getting built created a renaissance is a fallacy because that project was built because Malvern was already on an upswing. Another opinion I am entitled to.

I also took this photo a few years ago.  Please note that is scored concrete, not real brick. And when it is wet, that is STILL more slippery than real brick in my humble opinion. These buildings are still out of character with the size and scale of other buildings in Malvern.  People might be getting used to them, but it still doesn’t make it right.  Human scale and setbacks matter.

The things about East Side Flats getting built that businesses and Easttown aren’t mentioning include the piss poor low ratables – $60,000 was ALL that Malvern Borough got wasn’t it?

During a discussion of the police services and budgeting at the of Malvern Borough Council, resident Joan Yeager asked a related question:

“Once the King Street project is completed, how much additional money is going to come into the borough? In taxes and all,” she said.

“Something in the neighborhood of $60,000 a year,” council president Woody Van Sciver said, citing a financial feasibility study done before the project was approved.

“That’s it?” Yeager replied, expecting a bigger payoff from the several new businesses and hundreds of new residents that will be moving to the east end of the borough.

“It was staggering, how small it was,” Mayor Jerry McGlone said

So remember the fairy tales spun on pots of Township gold from ratables are NOT necessarily true are they?

Oh and the thing that Easttown and the pro-development faction DO NOT tell you about is the fact that after East Side Flats went up it was a HUGE catalyst for change because that next election the mayor and I think half of borough Council were removed on a massive stealth write in ballot campaign weren’t they?

In an example of democracy in action the voters in Malvern turned out in record numbers in the Nov. 5 to sweep out the incumbent mayor and three councilmen.

The pace and character of development in the borough was evidently the issue that brought voters to the polls, resulting in the successful write-in candidacy of three residents for seats on the council…David Burton, a Democrat who won the mayoral race 509 to 266 against long-time incumbent Gerald J. McGlone Jr., said development was the issue on people’s minds as he knocked on doors this fall.

At four stories, residents thought that Eastside Flats was too tall for Malvern, which is a small town with only 3,000 residents and encompassing a square mile. People worried that additional development would change the character of their hometown.

“Most people were upset as I campaigned,” said Burton. “People expressed that concern.”

So Easttown Township residents, it’s UP TO YOU. Don’t let non-residents and others tell you what your community should be. If you want to preserve your “village” then you need to send plans like this right back to the drawing table. Development needs to be careful and inclusive, not selfish. Don’t let non-residents, politicians, and developers make your village decisions.   Learn from the mistakes of residents in many different municipalities and counties.

Again, development should be inclusive and growth should make sense.  In my humble opinion, this plan is another one that doesn’t make sense and I am entitled to said opinion. Naysayers will point to this post and say again that I am anti-development.  I am not.  But what I don’t see around here that I have seen in other areas are plans that are complementary to the surrounding area. Does the Flat Iron Building in NYC look like it would fit here? Because that is what looking at some of  the renderings made me think of, right or wrong. And we can’t downplay the impact continued development has on traffic, other infrastructure, school districts, municipal services, etc. 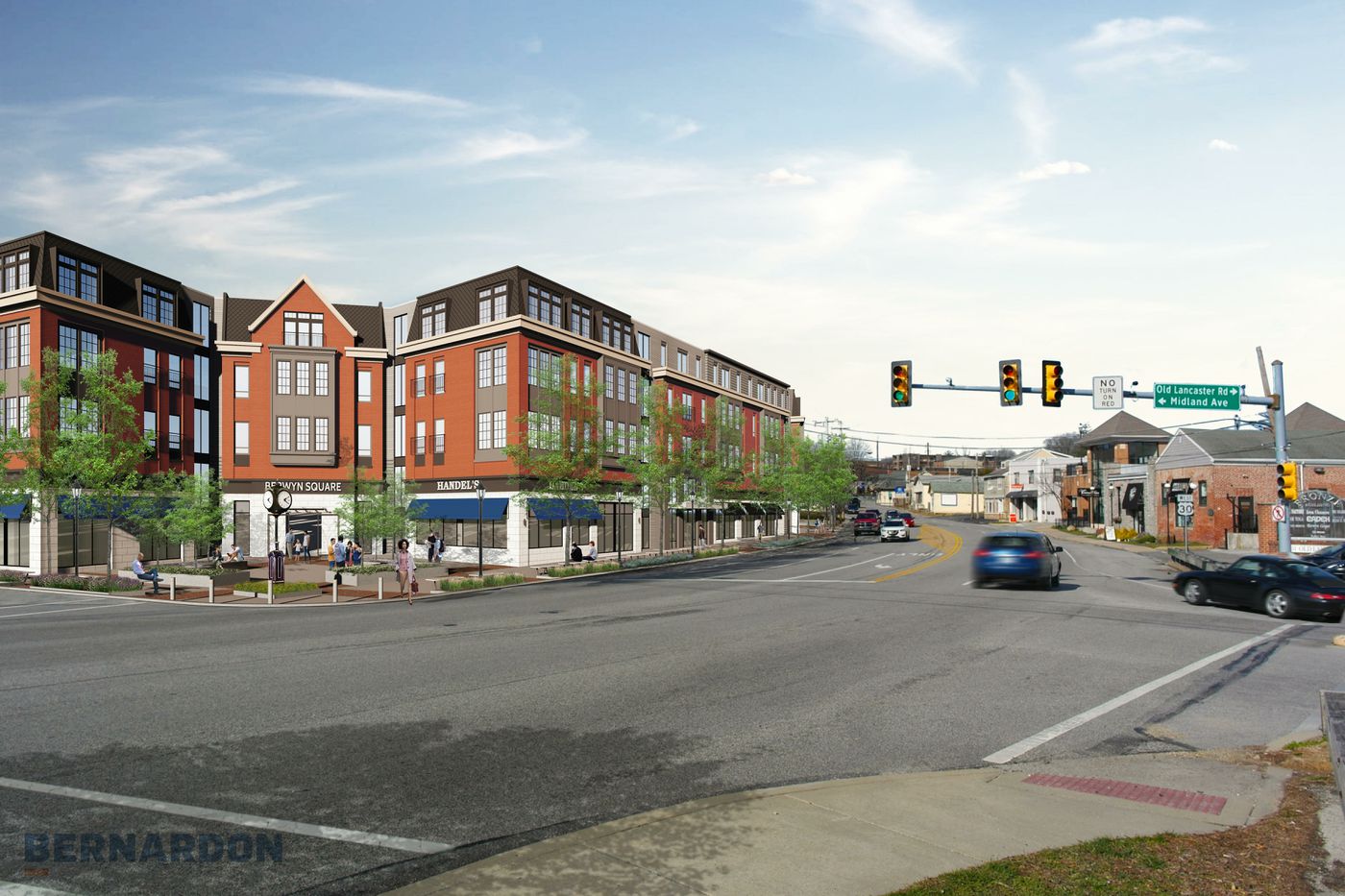 ….a four-story, 150,000-square-foot mixed-use development with Handel’s and one or two small retailers on the ground floor, luxury apartments above, and a public plaza in the center. The complex also would have a two-story, 228-spot parking garage. Della Porta declined to comment on how much they intend to spend on the project.

Over the course of two meetings this summer, developers presented their plans to the zoning board, asking it to allow the construction of a public plaza and one more story than the code permits. They will have a third meeting later this month. When the presentations are finished, Briggs said, the board will decide whether to recommend the project for consideration by the township planning commission, a process that would take months….Residents who oppose the project say the complex will increase traffic, put pressure on the police and fire departments, and increase enrollment in the Tredyffrin/Easttown School District. They’ve started a loosely organized group called Save Easttown to protest the plan, which developers have called Berwyn Square.

I am going to close with the words of the residents who are part of Save Easttown. I don’t know that I know any of them personally, but I feel for them.  This is too reminiscent of the crap which has destroyed Ardmore. Sorry not sorry for that opinion too.  A lot of us worked to literally save Ardmore from eminent domain. But how many years later what did we save exactly? It’s still a quagmire of crappy development plans, horrible traffic and no parking. And it keeps getting worse.

You may have heard of current plans to construct a mixed use project situated on what is now Handels Ice Cream and its adjacent buildings. The developer, Berwyn LLC, is requesting zoning variances in order to build above the current 42’ limit, meaning that the building will reach the 50’ + level. The project will consist of 122 apartments with commercial space, and will fill the entire block of Lancaster, Midland, Woodside, and Berwyn Aves. We are a group of concerned citizens of Easttown Township, who have come together to preserve and promote the historic residential neighborhoods of the village of Berwyn. We are opposed to the development of this project for a variety of reasons, which we’ve described below.

We are opposing the development of this project, because of its size, its population density, the increased traffic it will create, the impact to our police and fire departments, the parking shortages on the adjacent village streets it will cause, and the inevitable increase in the student population within the T/E school district. We also believe that there is a safety issue related to the number of children walking to and from T/E middle and Conestoga HS, especially with sidewalks being incomplete.

To give an idea of the density — the number of residents who would be housed in the apartment complex would mimic the entire population of all of Midland and Woodside Avenues combined. When questioned by an Easttown resident at the August 5 zoning board meeting, on the need for a zoning variance and why a project of this size is necessary, the developers provided two main reasons: the toxic underground waste presents a ‘hardship’ that can only be partially remediated (meaning that they can’t dig down very far to build a parking garage, and thus need to extend the height of the complex), and that the scale of the project needs to be this large, simply because anything smaller would not be “feasible” for them.

A project of this magnitude is unlike anything ever undertaken in the village (and it’s only one of several currently being proposed to our zoning board). The Berwyn village streets were built to accommodate traffic and parking needs from 100 years ago, not for what will occur if this development is allowed to go through as planned. Unless we oppose this project now, the impact will be felt for years to come. Not only will we face congested streets and parking shortages for existing Easttown residents (think Friday and Saturday around the local restaurants), but we are also endangering our children who walk to T/E middle and Conestoga HS – on streets without sidewalks.

2 thoughts on “residents, it is time to saddle up to save berwyn and save easttown – important meeting tonight at hilltop house !”