NPR is reporting that former First Lady Barbara Bush has died.  She lived an amazing life, but as an American, I am so truly sad.

I am a fan of the Bush family and while some might find that surprising, it shouldn’t.  They are as a family, literally a  legacy of service to Americans. None more than the senior Bushes, or Barbara and the first President Bush, President George H.W. Bush.

And I have a Barbara Bush story. Or two, actually. 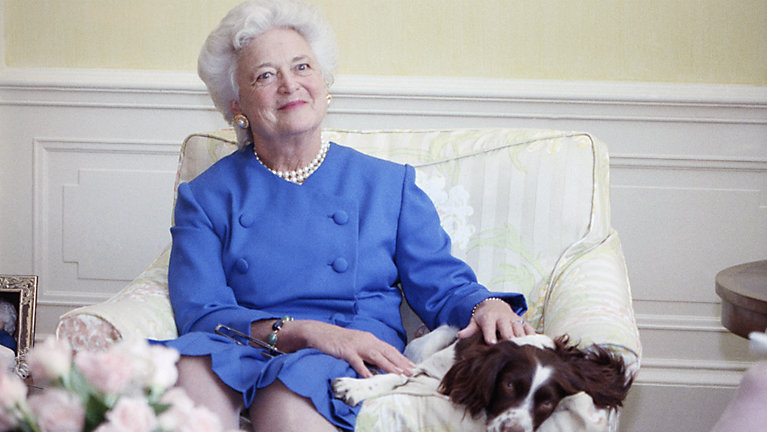 My parents had neighbors who arrived on the Main Line as sort of political exiles after the Bushes left Washington.  They had worked for them in Washington.  The wife subsequently worked in the second Bush White House. Anyway, these neighbors fostered a love of day lilies in me, and they did something really nice for my late father one time.

After the Bushes Senior returned to Texas, my father was going to be in Texas on business so their then neighbors arranged for him to attend some luncheon where he got to meet and spend time with Barbara Bush.

Also decades ago at this point, I was an executive assistant to a financial services executive.  One of his friends was one of the non-political Bush family members.  One day that person was in the office and noticed a photo of my dogs on my desk. I had a pair of liver and white English Springer Spaniels at the time.

A few weeks went by and a Fed Ex arrived from Kennebunkport, Maine.  Inside was a note from Barbara Bush and a personalized autographed and pawtographed photo of her and Millie, her beloved liver and white English Springer Spaniel.

It was one of the coolest things ever. And I still have the photo.

The Bushes made you believe in being a Republican.  There were no late night Twitter tirades, they were just the embodiment of class and dignity in the White House.  I was always sad President George H.W. Bush only did one term.

It was because of Republican women of a certain era like Barbara Bush that I then went on to be a media relations volunteer for the RNC 2000 in Philadelphia. And it was when I came to terms with the fact that this kind of Republican was lost at the onset  and uptick of the “tea party” and a Twitter President, that I eventually stopped being a Republican.

Barbara Bush, you were everyone’s First Lady and an amazing human being.  May your memory be a blessing.

Former first lady Barbara Bush died Tuesday at the age of 92, according to a family spokesman.

A statement issued on Sunday by the office of former President George H.W. Bush said that Bush had elected to receive “comfort care” over additional medical treatment after a series of hospitalizations.

“It will not surprise those who know her that Barbara Bush has been a rock in the face of her failing health, worrying not for herself — thanks to her abiding faith — but for others,” it said. “She is surrounded by a family she adores, and appreciates the many kind messages and especially the prayers she is receiving.”