The suggestions to name the East Whiteland Township’s next park are in and the finalists are Bacton Hill Park, Woodyard Park and Patriot Park. You can vote on the next name until March 8.

Bacton Hill is a region in East Whiteland that was an early village (and one of the largest early settlements in Chester County for African Americans. The Ebenezer AME Church and cemetery is a sacred space where at least three Civil War soldiers are buried. (Blogger Note: the ruins of Ebenezer and graveyard are currently in a somewhat precarious position due to proposed development)

Hiram Woodyard was a Township resident and former slave who served in the Union Army as a teamster. He was a leader in the African American community and is buried at the Ebenezer AME Church. His home still stands on Congestoga Road. Other homes he built still stand. (Blogger Note: the ruins of Ebenezer and graveyard are currently in a somewhat precarious position due to proposed development)

This name reflects the historical significance of the Township, region and members of the East Whiteland community.

My opinion? Please e-mail East Whiteland for either Woodyard Park or Bacton Hill Park.  It is the most fitting due to the physical location of the park, and it is a VERY important piece of Chester County History, as well as East Whiteland history.  Some of the dearly departed who lay in the Ebenezer graveyard have descendants who still live in and around East Whiteland, Malvern Borough, and Chester County today.

As a matter of fact, a slight segue but related to the importance of this particular area is in neighboring Charlestown on Bodine and Valley Hill Roads are the ruins of a little school for slaves and/or the children of the African Americans that settled in this area (like Bacton Hill).  It is the Longwood School and the school was built in 1857 as a one-room schoolhouse for African-American children. Charlestown Township secured the ruin and stabilized it – something I wish for Ebenzer.

Junior Girl Scout Troop 1773 adopted Longwood School. There is an essay written by a girl named Caroline. She speaks about the history of the school which was founded in 1857. It is fascinating.  Here is a long excerpt off of Charlestown Township’s website:

In 1859, vast changes occurred for Charlestown Township Schools. For example, they required each student to purchase a textbook for every subject. This was a hassle for many parents. The board also demanded that the pupils were to bring absent notices, and be given an exam at the end of the year. These changes were attempts to make the schools more high quality learning systems. Exams were given at every school EXCEPT Longwood School.

During the next five years, the School Board dropped the term “colored” school and started to call it “Longwood School”. Even though this act may have seemed more respectful, it would take a lot more for Longwood to be noticed as a school.

The summer school session stopped, and the Board changed the school year to nine months. That is, in every school EXCEPT Longwood School, where it was still only five months.

By 1873, all of the “regular” schools had funding for new facilities and had been completed by this time, EXCEPT Longwood School, where no funding was made.

In 1879, Mary Lloyd was to be the teacher, but she didn’t remain long. After trying to get a new teacher, they gave up, and the children at Longwood School had no teacher for that term.

In 1887, a new teacher, Linda McPherson began taking attendance records to the public’s attention. She noted that nearly 50% of all the students had perfect attendance or missed only one day of school. This was a step to show others what a great school this was. To show that it was just like all the others, and they didn’t slack off. They worked as hard as any other school.

Finally in 1889 the Board decided to equalize the Longwood school term to the other schools, as well as the teacher’s salary. The board finally started to realize that Longwood School was a regular school.

Acceptance of the school grew when a 94-1/2 foot well was built for the school in 1895. On March 18, 1895, the Pride of Pickering Council gave the Longwood School a flag and flagpole. At last, the students were beginning to feel like a respected part of the community.

On April 26, 1885, a celebration was held for attendance of the pupils. They sang songs, read poems, and planted an oak tree. They named the oak tree “Bryant” in honor of a poem’s author, William Cullen Bryant. Under “Bryant” a glass bottle with the names of people who attended, as well as the pupil’s names was buried.

In 1901, the final teacher was reassigned, and after serving 44 years of educational services, the Longwood School was closed.

That school is so close to Bacton Hill.  The AME Church grew out of the Free African Society in the late 1700s, but the church became it’s own entity founded in Philadelphia around 1816.  So you can see given the age of Ebenezer AME in East Whiteland, Chester County, PA that it is truly part of the early days of a church and religion founded in Philadelphia.  Bishop Richard Allen died in 1831, just months before Ebenezer came to be after Joseph Malin deeded the land.

I will freely admit it, to see Ebenezer rise like a Phoenix from the ashes at 97 Bacton Hill Road and to have people from all over recognize how historically important Ebenezer and her departed souls are is what I would love to see.  I would also love to see a park named either Bacton Hill Park or Woodyard Park so the history (much of which we can no longer see) is remembered.

I learned more about Hiram Woodyard from someone who now lives in South Dakota:

Photo is of  the grave of Hiram Woodyard at Ebenezer. He was a freed slave and Black Civil War Soldier who resided in the village of Bacton, “Bacton Hisotric District”, AKA “Bacton African American Community”.

In 1991, Jane Davidson, the then Chester County Historic Preservation Officer certified that one of the houses attributed to him on Conestoga Road as a “County Historic Resource”. She said “The events and activities that have occurred in and around the site form a chronological record of past knowledge that portrays a history of the area.”

The historical information listed in some of the paperwork states:

This resource is part of the Bacton Historic District which is a post-Civil War, Afro-American community. This resource is also connected with Hiram Woodyard who was a prominent member of this community….Due to previous development there is an eminent potential to widen Rte. 401,this threat would negatively impact the integrity of this resource.

In other paperwork, the same author continues:

Hiram Woodyard, one of two leaders in the Bacton African-American community, has become a local folk hero in recent years. While part of the timber industry as a fence maker, he also commanded a great deal of respect for his leadership ability, not only in the community, but also in the Union army.

This history is all interconnected. Naming a park to reflect the history that took place right there, and to remember the people of Bacton Hill just seems right.

Anyway, the name for the new park, a 16-acre property off Bacton Hill Road that is currently known as the Swanenburg Property, will be announced at the March 14th, 2018 East Whiteland Board of Supervisors meeting.

Find where East Whiteland posted the naming request on their website BY CLICKING HERE. ***Also note that in the screenshot below the information, historical information is different than what I have written or which the historic commission will provide. That is because (I guess) of whomever does the East Whiteland website is very, very busy because this is one of many historical fact errors I have found in the past couple of weeks alone. The devil is in the details as they say….. **** 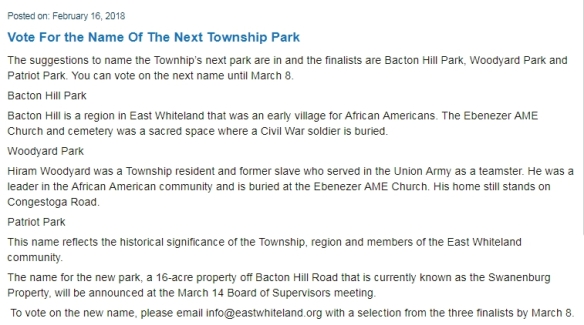