I am very happy the innocent pony has been found….in Port Jervis, NY which I learned is on the Delaware River in Orange County, NY – which looks pretty- it is apparently where NY, NJ, and PA meet.

I am however finding myself conflicted on this whole thing.  The netposse report indicates the pony was missing for a month.  So how do you not know where one of your animals is for a month unless you are on some ginormous ranch in Montana?

Who is the barn owner who sold a horse without paperwork?  Is that even legal?  And who is this family who was leasing the pony?  How do you just up and ditch a pony you are basically renting?  And if you were leasing a pony or horse that was beloved to your children would  you want it some place close to you or farther away?

Again, I don’t own horses, so I don’t know.  However can it be said that Ms. JB should have take away from this?  Can she understand now why people who adopt horses from her rescue get frustrated? Worried? Upset?

I noticed that there was a cash reward offered for safe return of the pony?  Maybe she can pay back some of what she owes to these other people out there who are upset with her rescue “business”?

And for the record, I truly want to believe all of this played out as Ms. JB said because can you say it would just be too awful to contemplate anything else because children are involved as well as an innocent pony?

Seriously St. Francis must be looking out here.  After all, that report above indicates the pony went missing a month and two days ago.  Truly, it is a miracle.

So yesterday was a flurry of horsification.  I posted “carol’s story”  and a child’s pony went missing.

Yesterday it was noted that Off the Track Thoroughbred Rescue seemed off-line both on website and Facebook page.  Now it’s back. It’s back with a missing pony notice:

I also saw this on Camelot Horse Weekly: 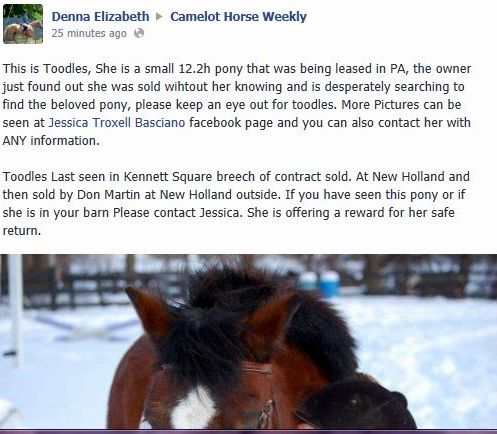 So we all understand – this stuff is posted in a multitude of places with multiple photos publicly.   I am showing cropped screen shots because I do not want to post clear photos of someone’s kids even to help them find a lost pony without their permission.  Especially given who this pony went missing from, capice?

Today this missing pony is posted everywhere and the chatter is the pony was being “free” leased (no clue what that is) somewhere.   Anyway, so there was some sort of lease arrangement and then supposedly the people leasing her did not pay barn fees or something?  And then the barn owner sold the pony?

So wait, stop.  How can someone just sell a pony without paperwork? Aren’t little ponies supposed to have those coggins things too?  Now the barn owner who sold the pony and the leasing family are not named anywhere, and well wouldn’t you consider naming names to get your pet back? If this is all true, don’t they have accountability?

Anyway, I am going to be the bigger person and the SOLE reason I am posting this is somewhere out there is a very upset little girl, and for the sake of the poor pony.  This is what was posted with the photo on Camelot Horse Weekly:

This is Toodles, She is a small 12.2h pony that was being leased in PA, the owner just found out she was sold wihtout her knowing and is desperately searching to find the beloved pony, please keep an eye out for toodles. More Pictures can be seen at Jessica Troxell Basciano facebook page and you can also contact her with ANY information.

Toodles Last seen in Kennett Square breech of contract sold. At New Holland and then sold by Don Martin at New Holland outside. If you have seen this pony or if she is in your barn Please contact Jessica. She is offering a reward for her safe return.

The idea of any creature being sold anywhere near New Holland makes my blood run cold.

I do however have to say one thing and that is how do you not know where your animals are? Nevertheless, if you have seen this pony, the pony should go home to that child, right?  Two innocents should not get caught up in some funky snarl, right?

But since the woman who is missing this pony runs a horse rescue where people have been upset on how animals changed hands,are occasionally missing paper work like health records and coggins, shouldn’t she maybe be more understanding of people and their needs with regards to horses? As in not only keeping the horses the way they deserve to be kept but keeping good and accurate records too?

So I am going to ask all of you something: in spite of whose pony this is, if you have seen it, contact her.  Do the right thing for the sake of a child and an innocent animal.

I will say however the timing of this is rather cute.  And that is opinion, and opinion is a God-given right.

I will also say this: something needs to give on how horses and ponies change hands at New Holland.

UPDATE: This like all the other things of a horse nature is swirling around and around.  Some of the pony photos have been shared widely on FB which means people are seeing comments about it.  This was sent to me.  I will say I am trying not to judge and I feel sorry for the little girl who now has no pony and I truly hope the pony is o.k. and safe.   I hope that pony finds it’s way home.