Sigh….when it rains it pours.  I have received another horse comment that deserves it’s own post….again it is about a certain local-ish horse rescue: Off The Track Thoroughbred Rescue and I guess also about that elusive Barbara Luna from Turning for Home which feeds horses coming off the track and into Off The Track Thoroughbred Rescue and Jessica Troxell Basciano’s care, and are we surprised?

As is the case with the more ad naseum post of earlier I did not solicit what I am about to post, it did not originate with me.  I don’t rescue horses, don’t own horses, don’t currently ride. If the rescue la la types have a hissy fit over this comment, they also sold this person a horse so they also know where to find them.  I do not.

The heat is on in horse rescue in Chester County I would say, wouldn’t you?

Here is the comment. The X-Rays are posted as photos within the body of this post as you can see. The comment comes from a lady named Lisa who comments regularly on these horse rescue posts:

Here is what the people of this rescue think a removed bone chip looks like. Didn’t know a removed bone chip required screws? My vet calls it a fracture not a bone chip removal and that this horse, my little girl’s horse that I got from Jessica Basciano, is not going to be able to do much when it comes to riding. I have invested a load of money in this horse and to find this out has been heartbreaking for myself, not to mention my little girl whose horse this is!

Oh yeah, I got this horse at the end of August and am now just finding all this out now. You think maybe in an almost 5 month spread I could have been told about this?

Also I am still trying to get my other horse’s vet records. In fact I contacted Barbara Luna a few weeks ago requesting them, as my vet is going to now have to a check on him as well, since I don’t know if I was told the entire truth about his injuries. I still haven’t heard a word back from Barbara about his vet records!

Hey Barbara, if you are reading this, my vet still needs Hi Card Gambler’s vet records!  Can I please get them for the 3rd time in asking for them?!

Here is the horse before this lady Lisa started caring for him: 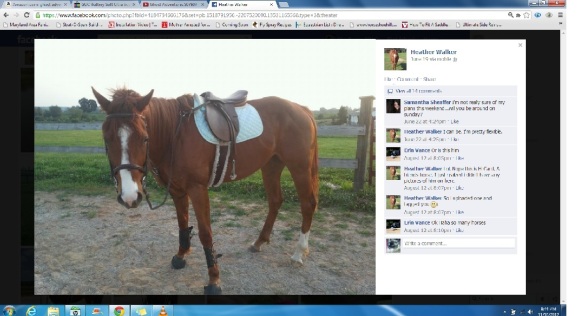 Here is is AFTER she bought him and has cared for him:

Here is some sort of discharge papers from when he was a racehorse:

Goes to show that someone will still care for an animal even when it ends up being more special needs than pleasure riding so why wasn’t eveyone just up front about this with all vet records?  These horses unlike the majority of dogs and cats who go into rescue have paperwork, have vet records — it is all supposed to go where they go so why doesn’t it?

Yowza! There seems to be a flurry of activity and phone calls and facebook messages and all sorts of Tom Follery.  Of course more people are asking where Barbara Luna and Turning for Home are in this hot mess. Follow this LINK for the 990 on Guide Star in 2010.  Barbara Luna must report to the board and they are listed on page 33 of the report.(also found here: Turning For Home 990).

So anyway, hope this all gets sorted out.  But this sure is one hot mess. Who the heck knew finding odd Craig’s List Posts in late fall would lead to so much drama?

I will admit up front I am waaay past cranky.  I have been sick for a week and I am tired of being sick.  Anyway between being sick and life in general I did not pay much attention to some outreach this blog received which was very interesting.  It came in a few days ago, I forgot about it, did not approve it and came back to it today.

Anyway this woman Kendall with whom I have never spoken, and certainly never met, got a horse called “Wildcat”.  Wildcat was mentioned by people in

the comments on  one of the posts.  I don’t remember where.

Silly me, I had no idea horses in a horse rescue in PA would travel across the country to the great plains state of Oklahoma.  But I don’t rescue horses so what do I know.

Facebook page and photos that are public of this horse. I am NOT publishing her e-mail as she seems like a victim if that is what you call it.  I did not solicit this woman, did not know she exists.  But if people from clear across the country are complaining now, what next? And if anyone mentioned in her comment have issues with being mentioned, well heck you sold her a horse and you know where to find her.

Makes you wonder that is for darn sure. What I am posting is unedited and it is unsolicited by me.  I don’t know her from Adam’s house cat. The only thing omitted is her e-mail address – no photos  were embedded with the comment. But again, I found photos of the horse on her Facebook page that were public not private photos. (we are not Facebook friends as it were.)

Sadly, I have to add my name to the list of people who have been misled by Off the Track Rescue and Turning for Home.

Mid November- saw Wildcat Lake on OTTB Connect facebook advertised by Christina Hannan representing herself as working for Jessica Basciano. I quickly received a private message saying he had come off the track with a bow but released to ride by a vet.

November 23, 2012- I received a fax with an adoption application from Christina Hannan and adoption agreement. All the paperwork was titled Off the Track-Jessica Basciano

November 24, 2012-I faxed back signed paperwork. The adoption agreement does not have a date, horse description, horse name or signature by anyone from adoption facility. I asumed all paperwork would arrive with him with the his description filled in along with a signature. Oddly, I received a private message cancelling the adoption saying Jessica didn’t want him to go that far. I then received another private message saying it was on again. We received several phone calls this same day from Barbara Luna, Jessica Basciano, Deb Jones and Bonnie Hutton confirming we were adopting him.

November 28, 2012 – Wildcat Lake was delivered to us in Oklahoma by a shipper we provided and paid for. No vet records, no rehab info, no signed adoption papers were delivered with him. We received a coggins but a couple weeks later discovered the tattoo does not match Wildcats tattoo..

Early December, 2012-I checked with our three references provided to Christina/Jessica and found no one had been contacted on my behalf.

Late December & Early January- I asked Christina for his vet records as she quoted he had been approved for riding in her advertisement. She again in a private message told me he had been approved to ride by two vets. She sent me a private message (see below) later telling me Wildcat had been released by Jessicas vets and that we should contact her. She said she had only spoken to her personal vet on the phone about it and he had not seen him. I called the vet that did his coggins and it was confirmed that he only did a coggins and did not discuss the bow and its rehab with Christina.

January 7, 2013 – . I then contacted Barb and Jessica for Wildcats vet records. I received both of their interpretation of supposed vet records but didn’t get the actual physical paperwk Barb said the vet that did track eval and followup eval with Jessica was Tom Lurito. I received this from Jess but no actual vet records were sent to me as requested:

Then I received this from Barb Luna-her interpertation of the vet records but no actual paperwork was received from her either:

January 8, 2013 – I left messages for Dr Lurito several times over the past two weeks

January 17, 2013- I contacted Barb Luna again telling her that I wasn’t having any luck with Dr Lurito and she responded that she couldn’t do anymore for me.

I still have nothing on Wildcat except my personal vets evaluation which is he is NOT ridable now, has a really bad case of rain rot, and underweight. No shot records were provided either.

For those few of you who are defending these ladies, you need to ask yourself a few questions:

what if I wasn’t a good person that received a horse in this condition? what would have happened to him? My references were never checked! I can only assume he was never vetted after the track so if jessica received money for him as she admits in an earlier post (approx 2000.00), what did she spend it on for him? we know it wasn’t for vet care, rain rot meds, ulcer meds, etc etc etc so what did she do with it? Christina stated she was “thinning the herd for health reasons” yet she is advertising as of today with more horses.. I see in earlier post where Christina says she adopted him from Jessica – then why was the adoption application titled OFF THE TRACK with Jessicas name if she no longer owned him? None of this makes any logical sense.

People, can this whole horse manure pile get resolved?  What does Barbara Luna think?  Is she ultimately responsible in some way since she appears to be the link between the tracks and the horse rescues?

It is time for the players in this drama to get together and get this figured out. I see names in her comment that mean nothing to me, but I have to ask is the Deb Jones she refers to the big deal horse rescue lady Deborah Jones mentioned in the media? ( See this article and this article for example)  Is this the lady from savinghorsesinc?

Giddy up y’all. Just Giddy up.

1.25.13: This message was purportedly sent to this Kendall lady by someone in the rescue.  Kendall isn’t very tech savvy so I believe she doesn’t know how to screen capture private messages very well and copied and pasted this to herself or something? I don’t know but whatever, here:

UPDATE 1.27.2013  Received this document from Kendall Pearsall in OK.  It is in native format “as is”

View this document on Scribd